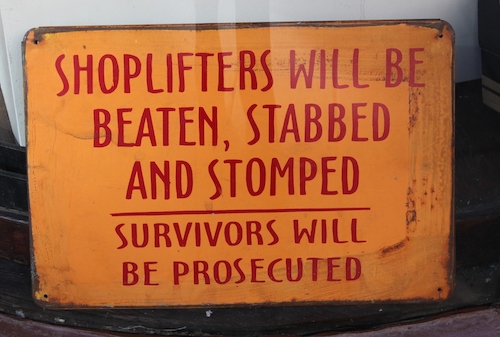 Remember when you were in high school and you told your mom you were going to Susie Straightlace’s house to study but you really went to Rachel Riskwhisker’s rager where you drank so much Grape Crush and vodka you had to crawl home with one eye shut and you peeked in your living room window to see if your mom was still up and you saw that she had removed her glowing, rutabaga-shaped brain from its cranial case and was recharging it with what you had once thought was a giant electric razor and you realized that she was an alien overlord?

I don’t, because that’s your memory, not mine. But gollyjeepers, I’ve got some doozies. (To be clear though, my mom was an angel.) Me, I had a tidy little enterprise in my high school years and beyond: professional shoplifter. I say “professional” because I ascended the ladder of five-finger skills through enterprise and gall, and because I sold the goods I lifted to high school acquaintances. Satan whispered in my ear a lot those days.

Well, I sold some of the goods–the significant amounts of liquor I stole were consumed by me and my cronies. Many of those were quaffed in the name of science, since items like blueberry schnapps and MD (Mad Dog) 20-20 “wine” weren’t actually meant to be ingested—by humans at least. And I was the guy who did steal Abbie Hoffman’s Steal This Book when it came out—Abbie, you asked for it.

Confessional memoirs have possibly peaked in popularity, but I’m always late to the party, so I recently wrote one. I have written essays over time about the impossibly poor judgment I had as a lad, but I hadn’t thought about writing a memoir until I was editing one for a client, hers being a 140,000-word composition about her years as a marketing executive in the senior care industry.

Part cautionary tale, part horror story about the dark side of aging, part song of friendship, part instructional on best and more humane industry practices, hers is a funny, sad, sharp and scary volume. Working with her on it made me realize that I could shape my misdeeds into a book, and at the least, terrify the parents of high schoolers who think their charges are studying at Susie’s. END_OF_DOCUMENT_TOKEN_TO_BE_REPLACED

My engagement was memorable to owners of jewelry stores within a two-hour driving radius of my home. I’m no celebrity, but apparently I'm a well-recognized…type. As unforgettable as the feel of grit on sandpaper, some might say. I didn’t set out to earn a reputation. I’m simply a person who struggles to find meaning, and since there isn’t an occasion more meaningful than a wedding, I struggled a lot. In public. Perhaps the jewelers would have been more empathetic if I’d told them the whole … END_OF_DOCUMENT_TOKEN_TO_BE_REPLACED This post is the next in the ‘All the King’s Editors’ series, the brainchild of WU contributor Dave King. In this series, WU contributors edit manuscript pages submitted by members of the larger WU community, and discuss the proposed changes. This is intended to be an educational format, and we hope this exercise will generate useful comments about the proposed changes--why the editorial suggestions do or don't work.  Interested in submitting a sample for consideration? Click HERE for … END_OF_DOCUMENT_TOKEN_TO_BE_REPLACED