Friends, I have a question for you: If I told you that I wasn’t a practicing writer anymore, would you kick me out of this community? If I told you that my entire creative axis has shifted from verbal to visual, would you assume that I no longer had anything relevant to say to writers? Or would you read my claim for the lie it is, given the fact of my having written these words here?

Maybe you’ll do the smart thing and recognize that distinctions among all forms of creative expression are just that – distinctions – and that the thing that links us all is our creative practice, no matter what form of execution that practice happens to take. With that in mind, I’d like to share a bit of what I’ve learned about art lately, and how it reflects on writing, too.

One thing I’ve learned is that a drawing starts with an idea, just as a novel does, or a poem, or a play, or a piece of music. The journey from idea to finished business traverses a landscape of versions – iterations – including sketches, studies, false starts, dead ends, botched details, blind alleys, bent perspectives, and images that just… plain… break… As with writing, music, performance, or any other creative aim, versions – iterations – are the key. With my sketches, I realize that if I’m not doing a lot of versions, I’m probably not doing it right. Those versions amount to my exploration of the idea, and just as with a novel or with anything, in the end I’ll have to know much more about the idea than it’s ever appropriate to show. Therefore, for better or worse (at this stage of the game mostly much worse), I set out to explore.

I start by setting a modest goal. Maybe I only want to draw a face with an interesting smile. Modest goals serve me because I’m not at all afraid of them. Here again my longstanding practice of writing and my emerging practice of drawing overlap. I know from way back that setting modest goals for a writing project keeps my expectations low, and with lower expectations comes better performance. That’s a handy awareness to have as I set out to do something I’ve never done before – make art – and am probably not very good at. Whether in pictures or in words, most every creative practitioner is kind of crap at the outset. The smart ones set the goal to “just be less crap,” as that’s an expectation than can easily be met, without pressure and without fear. END_OF_DOCUMENT_TOKEN_TO_BE_REPLACED A lot of people I know want to be writers but don’t have a practice of writing. Maybe they had one once and lost it. Maybe they’re just getting started in the craft. Either way, they don’t regularly carve out space and time to put words on the page, but they wish they would. It’s easy to understand why they don’t: life interferes. Maybe it’s a job. Spouse. Kids. Obligations can take many forms. Often, obligations form a secret conspiracy with a writer’s fear to keep that writer from writing. … END_OF_DOCUMENT_TOKEN_TO_BE_REPLACED If you were following WriterUnboxed back in 2013, you may have read a version of the column you’re about to read. (If you can remember having read it, you’re better person than I am; I can barely remember what I had for breakfast.) I was reminded of it recently, and inspired to share it again, while helping a protégé understand that the journey of a writer – a real writer – is the journey toward emotional truth. Writers often find themselves confronted by the question, “What is emotional … END_OF_DOCUMENT_TOKEN_TO_BE_REPLACED 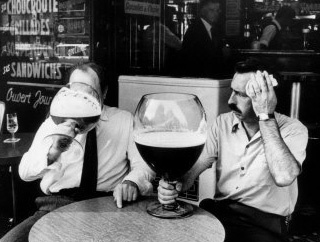 My nephew turned twenty-one last night, so I did the avuncular thing and took him out for his first legal beer. The talk turned, over beers, as talk will turn over beers, to “the meaning of life and the isness of it all.” He asked me why I write, and, in true Socratic fashion I tossed the question back to him. “Why do you think I write?” I asked, and he told me the two reasons that immediately sprang to mind: money and ego. We parsed these possibilities, and soon dismissed them as dead ends. … END_OF_DOCUMENT_TOKEN_TO_BE_REPLACED Author’s note: I’m currently rehabbing from rotator cuff surgery (forty years of ultimate frisbee will, in fact, take its toll) and my time at the keyboard is constrained by my doctor’s – and my shoulder’s – orders. We could pause to dwell on the remarkable fact that the word “constrain” means both to require and repress, but that would be a waste of the few keystrokes I’m presently allowed. We could also note that “presently” means both now and later; instead let’s dip into the archives for … END_OF_DOCUMENT_TOKEN_TO_BE_REPLACED Here’s what I do for weird fun and lexical exercise: I take lists of words I don’t know and weave them into stories, defining the words in context as I go. I’m flexing two creative muscles here, one that develops story and one that exploits language. I use this challenge and ones like it to shed clarity on my creative process, which, at its heart, is a strategy of setting a goal and then acting on it. In everything I write, I set goals – I frame the exercise – then I act, and that’s how I get … END_OF_DOCUMENT_TOKEN_TO_BE_REPLACED So I’m trying to bootstrap my writing game to the next level by investing time and hard work in research. Now, those who know me know that “I hate research like a cat hates baths.” But just now I made an amazing personal breakthrough and since I love process as much as I hate research, I wanted to share it with you at once. There I was, reading source material and taking notes. I had my .pdf research file and my “store notes here” file open side by side on my big computer screen, and when I … END_OF_DOCUMENT_TOKEN_TO_BE_REPLACED The first two novels I wrote appeared in serial form in a biweekly magazine, back around the turn of the century, when I basically bet that I could stay one step ahead of a pretty relentless deadline and/or still be churning out words when the fledgling magazine went belly up. I’ve always had a huge fondness for those novels, not so much for the content, but for the exhilaration of meeting that deadline, and for the audacity of thinking I could do so. “Here are these training wheels, bub – … END_OF_DOCUMENT_TOKEN_TO_BE_REPLACED Take a look at the picture accompanying this column. If you can’t read the text on the hat, here’s what it says: I work… I cniok… my happiness… I found this beautiful oddity on a recent trip to Europe, at a roadside rest stop where such head-scratching or unintentionally hilarious assaults on the English language can commonly be found on hats, jackets or shirts. Freak that I am, I kind of collect them, or anyway take pictures (though okay, I admit I did buy the hat). On this same … END_OF_DOCUMENT_TOKEN_TO_BE_REPLACED

Recently a friend asked me to write a short call to action for her high school English class, to help them break out of the arrogant insecurity of youth and into the freewheeling creative writing process that you and I know so well. Below you will find, more or less, what I shared with them. Can I prevail upon you to share it with young writers you know? Because after all, hey, why should we adults have all the fun? The problem with high school writing, it seems to me, is that much of it is … END_OF_DOCUMENT_TOKEN_TO_BE_REPLACED Years ago, I participated in a sub-one-act play writing competition, where the name of the game was to generate real drama, story and characters within a run-time of no more than ten minutes. I’ll spare you the suspense – I didn’t win, although if you ask me The Unbearable Lightness of Being Mr. Wacky was some kind of wonderful, but whatever. The guidelines they gave for the contest were brief but effective: Look for a moment of explosive change. Don’t worry about before, don’t worry about … END_OF_DOCUMENT_TOKEN_TO_BE_REPLACED