As an only child, I always had my own room. There were many, many rooms during the years when my father was a golf course construction supervisor. Some were cramped and generic, others included an adjoining bathroom or even a private balcony. One, at a ski resort, was technically its own rental unit with a separate address from my parents. At nine I had the entire second floor of our condo, which included two bedrooms, a bathroom, and a loft, though I usually hung out in the storage nook halfway down the staircase, which I also claimed. At our house in Maine, half the basement was mine. Not such a prize, as I had orange shag carpeting, no door, and a quarter of my space was taken up by the woodstove, which meant my winter sleeping quarters were five degrees hotter than hell. My dad eventually finished the basement and built me a proper room because he’s awesome like that.

I read, wrote, and drew constantly as a kid.

When I started college, my parents literally lived on the other side of the world—Thailand. Everything I owned had to be hauled to Missouri and stuffed into a shared dorm room. (Apologies to my roommate, who never complained.)

Eventually, I had my own apartment and wrote a rough draft of my first (literary vomit) novel in three months.

When I married, my “room” shrunk to a shared office. Two kids later I downsized to a cramped computer armoire tucked into the corner of a cluttered common room, the TV mere steps away. I responded to e-mail while the Little Einsteins theme song played in the background and took social media “breaks” when the hubby watched The Walking Dead. I wrote during those brief, precious hours when I had the house to myself, with frequent interruptions to let the dogs in, out, and back in again. Damn squirrels!

A single draft took years to accomplish. I feared I’d never have a successful writing career at that pace.

Other writers I knew, both female and male, have expressed similar frustrations when they lack a room of their own. What makes this room so essential for creativity? END_OF_DOCUMENT_TOKEN_TO_BE_REPLACED 2020 was destined to be a year of transition for our family even before Corona Time became a thing, but since March 13th these upcoming changes have been overshadowed by the odd reality of living in a pandemic “hot spot”. Don’t get me wrong; that reality hasn’t been all bad. Yes, my younger daughter did spend the last third of her freshman year watching TikTok videos and Netflix, with occasional breaks for pass/fail schoolwork, but her empty schedule allowed us to build a uniquely strong … END_OF_DOCUMENT_TOKEN_TO_BE_REPLACED My ENT didn’t call me a liar when I insisted I’m not and never have been a habitual mouth-breather, but he did smile before rolling his chair over to one of the posters on the exam room wall. He pointed to the graphic on the left. “Normal septum.” He pointed to the right. “Deviated septum.” He drew an exaggerated zig-zag in the air. “Yours.” He suspected I’d never taken in a full breath in my life. It took only a few minutes of paying attention to confirm that it was, in fact, possible to … END_OF_DOCUMENT_TOKEN_TO_BE_REPLACED 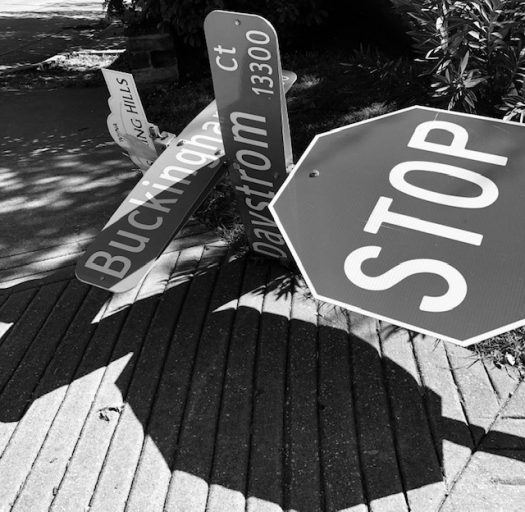 It wasn’t supposed to happen. October 20th had been a warm, cloudless day here in Dallas, and though a line of thunderstorms was forecasted to roll through later that night, no one expected more than some rumbles and a bit of rain. After dinner, my husband crossed the street to watch the Cowboys game with our neighbors. My daughters and I binge-watched Glee on Netflix. My cell phone was in another room. Sasha did homework and wasn’t on hers. We might have remained oblivious if Ashlyn hadn’t been … END_OF_DOCUMENT_TOKEN_TO_BE_REPLACED Trashing a little book called The Bridges of Madison County was a popular sport in the English department when I was in graduate school. Professors and creative writing students alike could not find a single thing to praise about the plot, the writing, the characters, or even the setting. My school was located less than an hour away from those famed bridges and most Iowans I knew revered anything associated with their beloved home state, so this extreme loathing seemed strange. As fifty … END_OF_DOCUMENT_TOKEN_TO_BE_REPLACED My older daughter is six months shy of being a legal adult. The approach of this milestone has been fraught with anxiety, so I anticipated a rough night before she embarked on a new semester at the local community college. She’s taking an extra class this time. She has a part-time job. She worries about keeping up with it all. What I did not expect was for her to lament that she saw nothing to look forward to in the years to come. Community college will only lead to a regular college, which she … END_OF_DOCUMENT_TOKEN_TO_BE_REPLACED I had grand plans for my next historical manuscript. The idea was solid, the plot outlined, and an experimental first chapter written. I’ve read that chapter twice now. The voice is compelling, the writing a level or two above ‘crappy first draft’ and it is still a story I want to write. Just not now. Getting this story down will require me to willingly break my own heart on a daily basis for over a year; it’s already broken each time I pull up the day’s headlines or log into social media. … END_OF_DOCUMENT_TOKEN_TO_BE_REPLACED I left home at sixteen and spent the next two decades hemming and hawing when asked where I was from. Upon hearing I’d lived in nine different places before I was three, most people assumed my entire childhood was equally nomadic, a perception I rarely corrected. In truth I had roots, reluctant ones, thrust deep into the unforgiving soil of the western mountains of Maine. I knew every ski trail on Sugarloaf, every snowmobile trail in Kingfield, and every swimming hole in the Carrabassett … END_OF_DOCUMENT_TOKEN_TO_BE_REPLACED I ignored the signs for months, convinced the anxiety, crying jags, insomnia, and moments of rage were hormonal potholes on Perimenopause Lane. In my defense, life has thrown a few curveballs since December. Before I could send out queries on my newly completed manuscript, I came down with the flu. On Christmas Eve. This illness transitioned into a violent asthmatic/allergic cough that remained until mid-March. I lost fifteen pounds (good) but only because I could barely eat or sleep (bad). … END_OF_DOCUMENT_TOKEN_TO_BE_REPLACED The helicopters are out in force again. The whir of propellers has become so commonplace since the morning of October 7th that the sound has faded into the background, a white noise machine only heard when the power’s cut. Today it’s two news helicopters, and they’ve hovered over a field a couple miles due west of my house from mid-morning until nightfall, a field I’ve driven by daily since 3-year-old Sherin Mathews disappeared. I pass by her neighborhood, an enclave of McMansions one … END_OF_DOCUMENT_TOKEN_TO_BE_REPLACED I admit it. For years I hesitated to invite anyone into my home, cringing even when my parents crossed the threshold. If there is a way to keep a house clean while sharing it with a husband, two children, three dogs and a Maine Coon cat, I haven’t found it. Dust happens. Fur happens. Clutter happens. My kitchen was the stuff of nightmares. The forty-year-old popcorn ceiling literally came apart at the seams, raining bits of plaster on me while I attempted to cook. My husband unsuccessfully … END_OF_DOCUMENT_TOKEN_TO_BE_REPLACED Several years ago I read The Underpainter, a novel by Jane Urquhart. The protagonist, Austin Fraser, creates a series of paintings depicting the people who have touched his life, then erases the details by applying progressively lighter shades of paint. Over the course of the novel, the paintings become a metaphor for how an emotionally crippled man has avoided true connection. Urquhart herself said in a June 2001 interview with January Magazine that she ‘hadn’t expected [Austin] was going to do … END_OF_DOCUMENT_TOKEN_TO_BE_REPLACED