It wasn’t supposed to happen. October 20th had been a warm, cloudless day here in Dallas, and though a line of thunderstorms was forecasted to roll through later that night, no one expected more than some rumbles and a bit of rain. After dinner, my husband crossed the street to watch the Cowboys game with our neighbors. My daughters and I binge-watched Glee on Netflix. My cell phone was in another room. Sasha did homework and wasn’t on hers. We might have remained oblivious if Ashlyn hadn’t been on Snapchat and felt her phone vibrate with the first alert.

It wasn’t raining or even windy, so at first we thought the alert was for somewhere far away. Wrong. By the time I got to my phone, my weather app sent out alerts faster than I could read them. We turned on a news broadcast, blaring the volume in the hope we might hear it from our interior bathroom, the only place in our house with no windows. To call it a safe room is an overstatement, but basements don’t exist in Texas and few people have storm shelters, so that’s where we went, bringing the animals in with us. It’s a semi-annual routine that raises my blood pressure and lowers my sanity, mostly because that room is the kids’ domain and I don’t go in there if I can help it. I forget how badly it needs to be cleaned until I’m faced with the prospect of cramming into a tub that probably hasn’t seen a sponge since 2016. My husband texted, Do I need to come home?

By then the siren blared, but the tornado was apparently near downtown. Close, but not close. I told him to stay put.

The alerts continued. A confirmed tornado on the ground in Preston Hollow, an upscale neighborhood I know well because Sasha had a private tutor there during the years she’d been home-schooled. I cringed, imagining (correctly) the fate of our local independent bookstore.

The storm moved northeast at a fast clip. My husband, who remained in front of a TV in a room that included not one, but two windows, texted me updates of the path, which started to include intersections I drive through daily. Confirmed tornado by Sasha’s community college, three neighborhoods west of our house, and headed our direction. The lights flickered.

This will be close, my husband texted.

Are you in a safe room?

Not yet. It’s raining a little.

How do you know that?!

I was sitting on the floor and glanced at Ashlyn over the bulk of our portly black lab. Her head was bent over her phone, totally unfazed by the reality that our house might be ripped up within moments. Sasha listened to the news report through the cracked-open door. Her eyes grew enormous when she heard the tornado had moved just south of Kroger, headed east. We were slightly southeast of Kroger.

I’m pretty sure I hear it. Going inside now.

He’s a Missouri boy. I will never understand the Midwestern compulsion to go outside and greet the swirling tower of doom when this former New Englander would prefer to be underground. I heard nothing over the blare of the TV.

My mind raced through all the stereotypical things one expected to think about at such a time. My kids. My husband. My parents, who lived nearby and who might also soon be in danger. 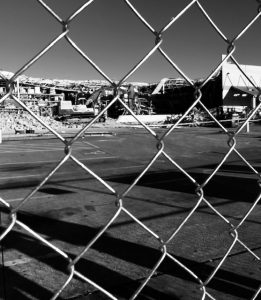 Then my thoughts drifted to my current work-in-progress, a story I think about obsessively and have only just begun to compose. The characters who berate me at two a.m. would be silenced forever if I died. If I hadn’t started each day for the last six months prioritizing my to-do list and everyone else’s needs above my own work, I could have at least finished a rough draft.

Not finishing could so easily have been my last regret, and that’s not something I’ll forget any time soon. A block north of us was hit hard by the largest of the ten confirmed tornadoes that hit my city that night. It’s a miracle that no one was killed, especially since one of our local news channels neglected to cut into coverage of the Cowboys game for a full six minutes after the tornado warning was announced because, well, priorities. I drove to Preston Hollow today and by the Home Depot that was featured on the national news. The damage is staggering.

I’m giving myself this week to deal with all those nagging issues that have been interfering with my writing time. Then I will be attending the Writer Unboxed UnConference in Salem, where I know I’ll find the inspiration and motivation I’ve so desperately needed since the last time I was there. If you see me, feel free to tell me your successful tips for coming up with a writing schedule or keeping your family—not just talking kids here—from barging into your office/bedroom with demands five minutes after your fingers finally hit the keyboard. Or just offer encouragement. The story scares me, but not as much as leaving it untold.

Have any of you had a scare that made you realize your habit of putting your work last? Would the idea of your current characters/story dying with you fill you with regret?

Note: My local independent bookstore, Interabang Books, was destroyed in the tornado. They will rebuild and are moving to a temporary location. Their online business has not been affected. If you plan to order any books soon and don’t care about Prime delivery times, please consider giving them some business.

+10
Previous article: Overcome Fear to Unbox Your Best Writing
Next article: The Perils and Pitfalls of Research