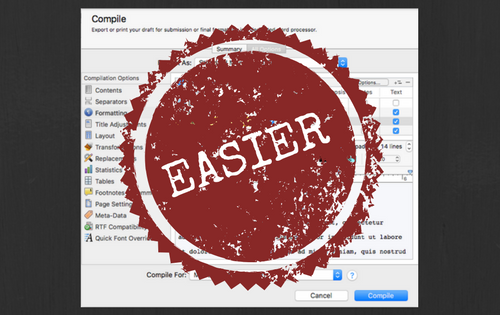 A common anxiety I’ve noticed among my Scrivener students and training clients is over whether they have their project set up “right.”

So, I’m going on the record: There is no right or wrong way to set it up. Scrivener flexes for whatever structure makes sense to you and works with your process.

For example, during my drafting phase, I generally write all of my scenes one after the other without putting them in folders (though I usually add the title page and other front matter items shown below later). If you write in chapters rather than scenes, you could follow a similar method. If you like to storyboard, I would skip the folders until you’re happy with the structure/order of scenes, so you can see the entire manuscript on the Corkboard. Once the draft is done and clean enough to send to my content editor, I group [4] the scene documents into chapter folders based on where I think the best ending hooks are, while attempting to balance the word count among chapters.

If you have a plotting method that requires it, you can add in chapter and/or part folders right from the start to keep everything organized as you go. In the past, I’ve started with empty part folders and added each new scene into the appropriate folder to keep the story structure loosely visible, and then grouped the scenes into chapters later.

That said, no matter what setup you choose for your drafting phase, there are some things you can do to make your life easier when it comes time to compile (export) your manuscript.

If You Remember Nothing Else…

There are two key things to understand about the Binder. *insert foot stomping here*

1. Files in the Draft folder (aka Manuscript, Screenplay, etc) will be one of three types: text document, file group, or folder. (Images, PDFs, and other non-text type files must be stored outside of the Draft folder.) Here’s an explanation of each.

– Text Document: A file where you write the text of your manuscript or keep notes on your work. Used to break the manuscript into logical scenes or sections (or for individual parts like blog posts, articles, and reports).

– File Group: A text document that contains other text documents, much like a folder, but not treated as a Chapter or Part during the compile process. Useful for organizing a manuscript or chapter into sections with section headings. If you remove all of the documents from a file group, it reverts to a standard document.

– Folder: A container for documents and other folders. Works like a document—and can have text in it like a document (e.g. for an epigraph or dateline)—but is usually treated like a chapter or part during the compile process (e.g. for titling purposes). A folder helps you visually organize your work and supporting materials. Even when empty, a folder is still a folder.

Below are the icons for each type of file.

2. By putting documents inside folders or file groups, you create an outline-like hierarchy within the Binder so that different files are at different levels. Your Draft folder is always level 0, and each indent is another level in the hierarchy. The image below illustrates. With Scrivener, you can write in one format, and export in another. You can create an ebook, and then turn around and immediately create a PDF without reformatting any text. This flexibility is possible because Scrivener does not present a WYSIWYG¹ interface for exporting your manuscript.

Instead, it allows you to set rules for each type of file at each level in your Binder. This is incredibly powerful. You can adjust the format of chapter headings or body text, or include/exclude titles with a couple of clicks. But that fine degree of control is only possible if you have different levels.

Most of the compile format presets (saved settings that produce different layouts, e.g. double-spaced manuscript for editor, small pages for paperback) assume you’re using a folder for each chapter that contains one or more text documents.

Presets that include the phrase “(with Parts)” assume you’ve also organized your chapter folders into part folders, similar to the image below, and add another level of folder formatting for part folders.

The Case for Folders

Organizing your work into folders gives you control over every element of your manuscript during compilation.

If you have front matter documents at level 1 in the Binder, they can be formatted differently from the rest of the text documents which are at level 2 (by virtue of being inside a folder). If the two types of documents are on different levels, it’s simple to create different settings for them on the Formatting tab in Compile. The same is true for formatting and printing folder titles and text.

TIP: To work with scene, chapter, or part titles, don’t add the titles in the text itself. Enter the title as the file’s name in the Binder. If you use a single document for each chapter and don’t put them in folders—as shown in this post’s first image—then your chapter documents and front/back matter documents are all the same level, and cannot easily have different formatting when you output your manuscript.

(Yes, it can be done, but you’ve made your job harder, especially if you’re not well versed in Compile.)

I realize the Compile function is intimidating to most users, and if you want to just choose the Standard Manuscript Format preset, output your manuscript to Word, and work your magic there, go for it. But understanding file types and hierarchy levels—and that compiling is all about applying rules—is the key to understanding Scrivener’s Compile process.

By utilizing folders to create levels in your Binder, you’ll make compiling easier. And who couldn’t use a little more easy?

Hit me with your Scrivener questions (related to this topic, or not). Also, what topics would you like to see covered in future posts?

¹WYSIWYG=What You See Is What You Get

Gwen Hernandez is the author of Scrivener For Dummies [13], Productivity Tools for Writers, and the “Men of Steele” series (military romantic suspense). She teaches Scrivener to writers all over the world through online classes [14], in-person workshops, and private sessions. Learn more about Gwen at gwenhernandez.com [15].