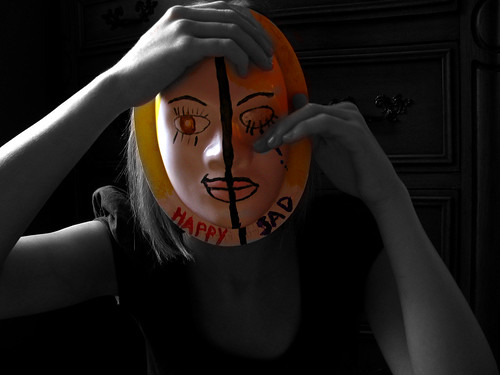 What distinguishes Sergeant Bilko from Lord Voldemort, or Voldermort from Michael Clayton?

Virtually every writing guide worthy of being read emphasizes the importance of character in crafting a compelling story. So why are so many of these same writing guides so vague on what it takes to create interesting characters?

John Truby, author of The Anatomy of Story—for my money, one of the best books on the writing craft available—emphasizes that the protagonist of any story must be “fascinating.” But he provides little practical guidance about how to create this capacity to fascinate. He instead discusses the protagonist (and all the other characters) in terms of their role in the story.

Is a compelling character really just the fulfillment of a role?

For centuries, this was exactly how characters — and human beings — were viewed. How did that start? When did it change?

The Evolution of Types

Aristotle equated change in a character with inconstancy, which he considered a form of moral weakness. Therefore, in a play, if a character changes, that change must be depicted as part of his essential character—as with Odysseus, for example, the quintessential deceiver and wearer of masks—otherwise the depiction is inconsistent.

Theophrastus, a student of Aristotle, compiled an entire catalog of characters premised on moral type—the flatterer, the coward, the newsmonger, the backbiter, the braggart, et cetera—and these depictions were predictably rigid. A character didn’t wander from one temperament to another, but remained fundamentally true to his type.

This kind of classification helped form the comic characters of Theophrastus’s student Menander, and a century later those of Terence, but its influence didn’t stop there.

English writers especially found Theophrastian characters useful, all the way through the 19th century. Fielding, Smollett, Thackeray, and Dickens employed them—they suit nicely the satirical purposes these writers pursued—and one often finds hints of them in secondary or comedic characters even today.

As clever and nuanced as these formulations may be, they retain the rigidity of a type. The character’s behavior is largely predetermined. What they do is seen as a direct effect of who they are—their type.

This point isn’t lost on the creative minds behind TV Tropes. They note that such characters are “sometimes … just plot devices with lines”—or plot puppets, as they’re sometimes called.

“Mediocre writers will merely take one of the … labels and slap a name on it. By contrast, better writers start with a character and slap two or more of the following labels on it.”

But how does the better writer create that character to begin with?

On this, the creators of TV Tropes are largely silent, except to refer the curious to another section on the site,“Characterization Tropes, where “the plot serves the establishment of the character.”

In other words, we’re back to character essentially as a role, a function of plot, rather than as a creator of plot.

[pullquote]As clever and nuanced as these formulations may be, they retain the rigidity of a type.[/pullquote]

A similar if slightly different variation on the problem arises when we consider characters not as types but archetypes.

Any writer who hasn’t been living in a cave the past few decades has encountered Joseph Campbell’s The Hero with a Thousand Faces and the widely popular writing guide that emerged from it, Christopher Vogler’s The Writer’s Journey.

Using the work of Carl Jung as a template, both Campbell and Vogler reached back into the realm of myth to reclaim a deeper sense of meaning in storytelling. In doing so, they resurrected Jung’s concept of archetype, and argued that stories that speak to our most basic humanity all reflect these archetypes in one form or another.

Thus we were introduced not just to the Hero but the Mentor, the Herald, the Sorcerer, the Trickster. But are these characters really anything different than, say, Wise Teacher, Johnny on the Spot, Amoral Scientist, or Genius Practical Joker? Are they just tropes or types dressed up in mythological drag?

Theophrastian types or character tropes largely reflect a social role played by an individual, a kind of mask worn to define a certain way of acting among other people.

Archetypes speak to a deeper essence that defines behavior not in terms of social role but in terms of soul, or destiny. They reflect the ancient view of character as fate.

But despite this soul vs. social distinction, both types and archetypes retain a certain sense of predetermined behavior. What these characters do remains very much a function of who they are. Even though the Hero may “refuse the call,” he only does so temporarily. Otherwise, he’s not the Hero.

The Transition to Modernity

Slap a little individuality on an archetype and you get many a modern character, from Hercule Poirot to Katniss Everdeen, from Harry Potter to Jack Reacher.

But we’re moving toward something more like a real human being when we recognize that archetypes aren’t confined to myths, and needn’t be imprisoned in their personae.

We see something akin to archetypes, for example, in the work of Franz Kafka. Gregor Samsa and Josef K have much the same dreamlike aura as John the Apostle or the Green Knight. The distinction lies in the obsessive introspection Kafka provides his characters. (This also explains, despite the efforts of directors as varied and gifted as Orson Welles and David Hugh Jones (with a script by Harold Pinter), why Kafka’s work remains virtually impossible to capture on film.)

The Move from Mask to Personhood

It’s through introspection that types and archetypes manage to escape the prison of predictability. Consciousness suggests choice. And it’s in volition—the freedom to choose—that characters emerge from type and assume something akin to personhood. For such characters, in contrast to types and archetypes, what they do defines who they are, not the other way around.

Without a real capacity for error and failure, without confusion and genuine doubt—the baggage of choice—a character not only lacks recognizable humanity. He lacks what it takes to be genuinely heroic.

And once we realize that it’s a character’s freedom that makes him capable of “breaking role,” and thus able to generate real surprise, we begin to see the other elements that comprise a compelling portrayal.

[pullquote]It’s through introspection that types and archetypes manage to escape the prison of predictability. Consciousness suggests choice. And it’s in volition—the freedom to choose—that characters emerge from type[/pullquote]

We understand that personality is forged in moments of helplessness, such as moments of extreme fear, shame, guilt—but also love, pride, and joy. In these moments when a person is seemingly a victim of circumstance, a prisoner of his emotions, he’s also sooner or later compelled to act. And those actions, performed in the face of his helplessness, define him.

We understand the natural human tendency toward contradiction. Unlike types or archetypes, people choose not just one role but many, usually because they’re obliged to act differently in different social circumstances—they must be “many things to many different people.”

Contradictions also reveal the degree to which we’ve been shaped by contradictory influences: cheerleader fathers versus disapproving mothers; demanding coaches versus slacker pals; unfaithful lovers versus devoted friends. In so many aspects of our lives, we can find traces of a devil on one shoulder, an angel on the other.

Secrets provide another crucial tool for portraying a genuinely human character, for they create an instantaneous impression of depth—the character has an outside and an inside, a social facade and something concealed behind it.

Secrets speak to fear and shame and guilt, and create an immediate impression of fallibility. The character with something to hide is inherently at risk, and we automatically understand that failure is a distinct possibility, which places the story in doubt, and enhances suspense.

And though all characters of any interest possess some kind of desire, this alone isn’t enough to rescue them from the straightjacket of type. A wasp, once its instinct to sting is triggered, can’t stop until the attack is complete. A great many characters have this same kind of hard-wired desire, and feel equally subhuman because of it.

To make a character’s desire truly compelling, it’s often necessary to recognize that the misfortunes of life often distort our understanding of what we truly want. Broken hearts tend to surrender. Fear can swallow a man whole.

But beneath that surrender, beneath that cowardice, there remains a deeper, perhaps unconscious yearning for love, truth, and courage. It’s not just the body that has a natural inclination to heal. The soul does as well.

It’s that deeper, often suppressed or unrecognized desire of the wounded psyche to heal itself that creates a truly profound character—precisely because we so often choose to deny, ignore, or subvert that deeper inclination.

Understanding this conflict between conscious desire and unconscious yearning can help a writer create a character partially blind to his own nature, and that blindness provides real uncertainty as to whether the character will be able to survive the gauntlet of conflict and misfortune the story presents. But the gift of insight remains, and with insight comes the ability to choose, with all its perils—and promise.

[pullquote]It’s not just the body that has a natural inclination to heal. The soul does as well.[/pullquote]

Take away a character’s capacity to choose—and thus to err and fail—you’re stuck with a type or an archetype, which is just a backhanded way to rig the result. That’s not character, that’s cliché. And only the dullards among your readers won’t see what’s coming.

Now, for the craft advice:

How conscious are you of your use of types or archetypes?

Has your use of types or archetypes helped or hindered your characterization? Either way, why?

+2
Previous article: Take 5: Heather Webb and RODIN’S LOVER
Next article: Editing, Uhh! What Is It Good For?