[1]I’m in one of those weird in-between places with my writing. After a roller coaster ride involving the loss of an imprint and three editors, and a dark-moment-of-the-writerly-soul retooling of a premise, I’m able to take a breath. I’ve turned in line edits and now I’ll wait to hear back about copy edits, and etc…

I’ve been fretting over this story since 2008. Now, I feel a bit like a bear coming out of hibernation. Blinking at the light. A little hungry, a little grumbly and disoriented and restless.

What should I do? I ask myself every morning, re-assimilating to not having to work on a manuscript. I can go to the grocery store. Exercise. Play games with my kids. Bake brownies. Exercise some more. Consider, for the 207th time, becoming a banker.

Most recently, I faced my desk. It was thick with the evidence of battle, strewn mostly with stacks of old printouts of my manuscript. I examined the stacks, deciding what I needed to keep, what I wanted to keep, and what I absolutely had to toss. (Retaining seven versions of a story is somewhat depressing, as I see it only as more evidence that I am so not a natural at this.)

Then I look at the notes. And I don’t have the heart to remove a single one of them.

After my dad died–at the far-too-young age of 56–my 16-year-old sister began taping notes all around her desk at our family’s home. She wanted to finish school, and she was struggling mightily. “You can do it!” “You are stronger than you think!” (And the like.) It was a show of her strength but also of her demons–a need for her strongest self to argue against all of the other parts, and hopefully be enough to shut those parts up so that she might succeed. I always felt vaguely uncomfortable faced with her notes, and half-turned away from them whenever I was near. They were just so real and raw.

After my debut sold in 2008, when I became petrified about writing a second book–the downside for me of a generous two-book deal–I too turned to notes. In the next few posts, I’d like to share them with you, let you in on the daily struggle I felt over this manuscript. These notes saved me, in a way, and maybe you’ll see something in them for you too. Or maybe you’ll want to half-turn away; that’s okay. At the very least, you may better understand my “I wish I were a banker” jokes.

In later posts, I’ll talk about one note at a time–what it meant to me, how it helped me to push on. But for now I want to close by sharing a single note that should need no explanation. 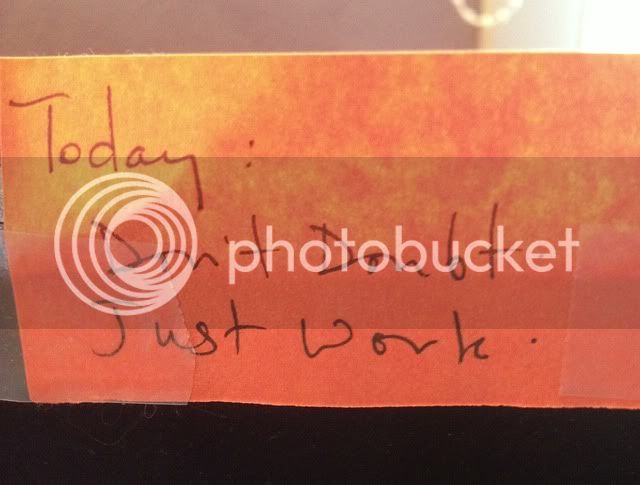 Therese Walsh co-founded WU in 2006 and is the site's editorial director. She was the architect and 1st editor of WU's only book, Author in Progress [5], and orchestrates the WU UnConference. [6] Her second novel, The Moon Sisters [7], was named one of the best books of the year by Library Journal and Book Riot; and her debut, The Last Will of Moira Leahy [8] was a Target Breakout Book. Sign up for her newsletter [9] to be among the first to learn about her new projects (or follow her on BookBub [10]). Learn more on her website [11].