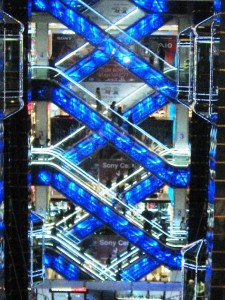 This morning I delivered my latest novel, The Texas Twist, to my publisher, and then I stopped writing – for about twelve hours. Now I’m back writing again.

Every novel I write teaches me something, and the big lesson of this one was let the crap be crap. In the midst of the first draft – what I call all the work that happens before I see the words THE END for the first time – I became aware that I had all sorts of loose ends, unfulfilled promises, pointless red herrings and other strange or random or useless ideas there on the page. I kind of freaked out a little. I wanted to hunt down all those mistakes and kill them, but I swallowed the urge, because I knew I’d never get to the words THE END even once if I didn’t stop fussing with the middle. I trusted myself that I could clean up the mess later and made myself be okay with that. I knew I couldn’t solve the puzzle of this novel until I had all the pieces, including the ending and the superfluous pieces that didn’t fit.

If writing a novel is like creating the puzzle and solving it at the same time, things are bound to get confusing. So for me, I break it down into steps, two to be exact: 1) create the pieces, 2) see how they fit. Simple, right? And I think I’ve always known that I can’t do both at the same time (I think most writers can’t.) What I got out of writing The Texas Twist was a better understanding that it’s okay to create pieces that I know don’t fit. They can always be made to fit – or thrown out – later. But if my expectation is that I’m going to get it all right on the first pass, well, then I’ll get caught up in fussing and I’ll never get to THE END.

My goal is to get to THE END. To me, that’s a precious destination. See, dummy that I am, I don’t work from an outline. I have found that if I know too much about how the story’s going to go, I lose my excitement for writing it. So I wrote The Texas Twist much as the reader reads it – wondering what’s going to happen next. Okay, that’s fine as far as it goes, but along with the curiosity comes the fear. What if I can’t figure out what happens next? What if it all falls apart before I get to the end? What if I don’t create enough pieces? What if I lose?

But when I get to THE END, my fear goes away. At that point I know I have some kind of draft, and now it’s just a matter of making it good, if I can. In the upshot, I write my first draft in a certain state of anxiety, but I do all my edits in a deep sea of tranquility.  No wonder I’m so eager to see those words THE END for the first time.

Here’s another big take-away from this engagement. You could say it’s the whole secret of story: “Story isn’t hard. Just never have things go as planned.” Whenever I found myself wondering what should happen next – and fearing that I wouldn’t find it – I just asked myself two simple questions. First, what can my characters reasonably expect to happen next? Second, what could happen instead? Again, this is a pretty self-evident fact of storytelling. We all know that when we spit our words on the page we should expectorate the unexpected. What may not be so self-evident is how agreeably logical this process can be. Once you eliminate what’s likely to happen, virtually anything else you think of will be unlikely, and will therefore drive the story forward.

How do I know I’m writing the right story? I don’t. I never do. And I also don’t care. I don’t believe in “the right story.” I believe in “a story that works.” Like the sign says, “The ocean is blue and it’s also wet.” There’s always more than one right answer, always more than one successful path through the material – and probably never any one “best” path. In writing this novel, I detached from the need to find the best path and focused instead on following one of the many intriguing paths that presented themselves.

Next lesson: never lose the whimsy. A couple of paragraphs back, I shoehorned in the phrase “expectorate the unexpected.” That was a goony self-indulgence, but like the sign says (lots of signs around here tonight), “Self-indulgence is its own reward.” In writing The Texas Twist, I often found myself thinking, “Well, that’s certainly a silly choice.” Then I would go ahead and write the silly choice just because it was a silly choice. I served my whimsical nature, and in the end it worked out well. Many of my choices are silly, but they hang together in a silly whole. And anyway, they helped me get to THE END.

Having gotten to THE END, I then went back and started fixing the mess I’d made. It took four full passes through the manuscript before I felt like I’d tucked in all the corners, removed the dead ends and red herrings, and created a story that was internally coherent and (one hopes) fulfilling to the reader. With each pass my focus became finer. On the first edit, I was fixing major story problems and making big changes. By the final pass I was focused on small stuff, like, “How many times have I used the word ‘whimsy?’ Is it too much?” So this was another big lesson: my editing task gets smaller and finer with each pass through the material.

Now the book is in the hands of my publishers, and I look forward to getting their notes. They will know something I can’t possibly know: how the book reads to someone other than me. I will look to them to tell me whether my plot logic and story logic hold up. If you don’t know, plot logic is what happens because the author needs it, and story logic is what happens because the characters need it to. In a well wrought story, both types of logic will be served. But never fear! If they’re not both being served in the current draft, that’s a problem that can be fixed.

Do you doubt that there are many fine paths through your story? Do you doubt that all the problems can be solved? Do you doubt that you can arrive at a fulfilling, satisfying telling of a tale? Me, too. But guess what? We’re wrong. All it takes is a little whimsy, a little willingness to make a mess on the page, and a lot of faith that we can clean up the mess we made. I’ve just finished my… counting on fingers here… seventh novel. Every single one was a mess at some stage. Every one turned out all right.

So, yeah, I learned a lot writing this novel. Mostly I learned that I can’t stop writing. Good thing I love it so much.

0
Previous article: The Importance of a WOW Book in an Overcrowded Marketplace
Next article: Take Five with Sophie Masson: The Romance Diaries