Kath here. Today’s guest is C. Hope Clark. She is editor of FundsforWriters, selected by Writer’s Digest for its 101 Best Websites for Writers for the past eleven years. She’s been industrious in platform building and social media outreach, and her newsletters reach 43,000 readers weekly. But the soul of her writing is in the mystery genre, and Bell Bridge Books released Lowcountry Bribe, A Carolina Slade Mystery, in February 2012. We’re pleased to have Hope with us today. Enjoy!

Mysteries, like most genres, have unwritten rules. Agents know them. Publishers know them. Bestselling authors know them as do rabid mystery fans. A sleuth, professional or amateur, solves a crime. Easy enough, but under that simple definition are preferences that make or break a mystery’s acceptance for publication.

Lowcountry Bribe, A Carolina Slade Mystery, Bell Bridge Books, was written in a mainstream, serious voice. But the amateur protagonist was a mother, and the children were young, a conflict in the character’s efforts to solve crime. In most publishing circles, that basic fact of active motherhood tends to throw a story into the cozy category. An agent once told me that my protagonist sounded too cool and critical for a cozy. I never tried to pitch it in that vein, but people made that leap anyway.

Not that I have anything against cozies, but that is not my world. My stories are edgy, and the violence strays far outside the parameters of cozy. However, that crosscurrent of domesticity amidst crime had much to do with the 71 agents who declined my request for representation, and the several dozen publishers who weren’t ready to welcome that combination. I was beginning to think that the mystery genre did not lend itself to married women, much less women with kids. Women don’t use their womb and then lose their ability to decrypt problems.

In most best-seller mysteries, the protagonist is a damaged, single male with random girlfriends, a girl he can barely hold onto or a divorced wife who took off with the kids. His life is in crisis. Solving the crime is his twenty-four-hour life, and his social world limps into nonexistence as his sidekick tells him to find balance. He’s stressed, with oh so much on his plate. He’s given up on developing a family life, while my protagonist fights to preserve hers. She fights the conflict of her natural daring-do versus the loves of her life. 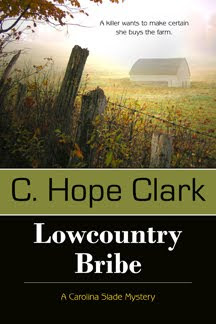 However, women detective characters aren’t much different than the standard male figures. Sue Grafton’s alphabet mystery series feature Kinsey Millhone, a private investigator who lives alone, visits her eighty-year-old neighbor for pastries, cleans her apartment for entertainment, and fears relationships. The author explains in interviews that Kinsey had to hit the road on cases with little notice, and children would water down the intrigue. Look at Patricia Cornwell’s Kay Scarpetta and Margaret Maron’s North Carolina judge and sleuth, Deborah Knott. No urchins in those houses.

Sara Paretsky, the author who originated the female sleuth, pulled women out of the vamp or victim role in the 80′s with her V. I. Warshawski character, a divorced private investigator. While Sara broke the mold for women authors and their characters in the mystery world, her character’s template may have stereotyped female gumshoes as uninvolved and unattached, just like the men that preceded them.

Carolina Slade, however, has two children in elementary school. I wanted to keep her real, showing how a personal life can be just as critical for a parent as it can be to a single, socially-ruined individual. The conflict is actually more involved, with so much more at stake.

Come on, people. We procreate. What better way to drive a sleuth crazy than having to hide the stress of the day to those she lives with in the evening? Eventually the pressure turns on her.

Understanding my market and identifying with the reader rang truer than true, as I considered how many mystery readers were hard-working parents who’d enjoy feeling empathetic toward this protagonist. The key was to keep the tension taut, the routine day-life at a minimum, and the risks high.

There was potential here for a new niche with a new kind of sleuth. Tough and tender.

But the oddity of my story didn’t stop there. I also placed Slade in rural communities, the crimes usually related to agriculture. When considering the grand majority of agents and publishers are urbanites, you immediately understand the additional obstacle to finding a traditional publisher.

Rural USA is also stereotyped. Laid back evenings at sundown, rows of wheat, huge front porches and rocking chairs, maybe outhouses and county fairs. Little whitewashed clapboard churches filled to capacity on Sunday. With such a wide, sweeping brush given to a country canvas, the unknowing see crime in the country akin to placing a Dippin’ Dots stand in an Apocalyptic ghetto.

But with humanity comes evil and conflict, regardless the setting. I’d worked elbow-deep in it in my past life with the US Department of Agriculture. I knew Federal agents who specialized in agricultural crime. Murder, fraud, embezzlement, political favors, arson. Americana quilts and apple pie on window ledges doesn’t mean the resident farmer isn’t dealing drugs and committing serial murder across three counties. Again, a fresh perspective . . . niche material.

As with any writing in this business, a story has to be unique but not so off-the-wall it isn’t marketable. Magazine writers are notorious for taking a standard, evergreen topic and turning it on its ear to present a crisp view and a flipped angle. Novelists take a huge risk daring the same, but the end result can be a popular brand for the author, which in this day and time can easily start a trend. Someone just has to jump in first.

0
Previous article: ‘Social’ Media: And the Boat We Rowed In On
Next article: 3 Pieces of Advice For Aspiring Authors