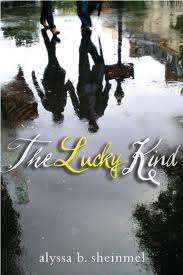 Alyssa B. Sheinmel has quietly been building a reputation in the YA market for excellence.  She came on my radar when her debut novel, The Beautiful Between, garnered a slew of positive reviews and buzz.  The New York Post called it “Endearing, realistic and heart-wrenching. Sheinmel offers a thoughtful look at teens,” while Publisher’s Weekly said, “Sheinmel makes an impressive debut with an absorbing tale of unlikely friendship, loss, and family secrets…the intriguing and well-defined characterizations will keep readers riveted.”  My teen daughter loved the book, so I knew Sheinmel hit the sweet spot for her audience, which isn’t easy to do with today’s media-saturated teens.

So I was pleased to learn that Sheinmel’s sophomore effort, The Lucky Kind, continues her examination into the lives of teens with honest dialogue and motivations, and a plot that quietly unfolds yet snowballs to a riveting conclusion as we read how Nick Brandt, the kid who has it all, copes with his life unraveling.  Sheinmel avoids trendy language and pat resolutions to offer a story with characters who are complicated, and issues that are timeless.

Enjoy part one of our two part interveiw with rising YA star Alyssa B. Sheinmel.

Can you share with us your journey to publication?

I always wanted to be a writer.  I have notebooks full of the stories that I wrote from the time I learned how to write in the first place.  When I graduated college, though, I needed a day job, of course, to pay the bills.  That job and the one that followed took up most of my time and energy, so it was a while – a few years – before I’d written something I thought was worthwhile, something I was ready to send to agents.  But I think that I needed that time to grow as a writer, and I also was lucky enough to find a day job that became a career I love, marketing children’s books at Random House.

Since The Lucky Kind was my second novel, writing it felt different from writing my first novel; there was the safety of knowing that there were people on the other side of the story (my agent, my editor) whom I knew would read it.  But more than that, knowing that they would read it, I wanted to write something that they would be proud of me for having written.  I tend to write in fits and spurts, and I definitely had a lot of starts and stops with The Lucky Kind, which was also true with The Beautiful Between.  There were plenty of moments when I thought The Lucky Kind just wasn’t working (I even put it down to write something else when I was about halfway through the story).  But when I look back on it, I know that I loved writing this book.

What was it about writing for teens that drew you?

I never intentionally chose to write for teens; I just wanted to tell the stories that I had to tell.  But I do love writing for teens.  I know it’s a bit of a cliché to say this, but I truly think that no books stay with you like the books you read when you’re young.  I still remember the first chapter book I ever read (The One in the Middle is the Green Kangaroo), and I still remember how proud I was when I finished it, exactly where I was sitting in my grandmother’s house, my father at my side.  I considered myself a reader from a fairly young age, but never more so than as a teenager.  The books that I loved then are the books that I read over and over; I can recite passages of those books from memory to this day.  Now, I try to write for the teenager that I was, who loved her books so much that she begged her mother for bookshelves the way most girls beg for clothes.  (Though, of course, I begged for plenty of clothes, too.)

Could you describe your writing process?  What are some of the things you’ve learned that you can share with other writers?

I’m a big reviser, and in fact, my number one piece of advice to other writers is to embrace revising.  I resisted rewriting in any major way for years, but my senior year of college, I had a wonderful teacher who taught me what an amazing tool it could be.  Now I rewrite everything I write, and I honestly don’t think I could make it through a rough draft of a novel if I didn’t know that I was going to go back and redo it all later.  If something isn’t working, I can skip over it and fix it some other time; if I’m feeling stumped, I can jump ahead and go back and fill in the blanks when I’m ready.

THE LUCKY KIND is one of those quiet stories that peels away the layers until the characters are left raw and at an honest place.  Your protagonist Nick has a charmed life that unravels because of a secret.  What was the genesis of this story?  Did it present any unique challenges for you?

Well, thank you for that!  The idea for this story had been percolating in my imagination for a while; I’d been thinking a lot about adoption, and I wanted to write about it.  From the beginning, I knew I was going to tell the story of someone on the periphery of adoption; not the person who gives up a child for adoption, and not the person who was given up.  The story in my head was of a boy just outside of the experience of adoption, but who was nonetheless deeply affected by it.

What are some of the things that writers need to be mindful of when writing a character-driven story like THE LUCKY KIND?

I think the most important thing for me when writing this book was not to lose Nick’s voice.  Nick’s voice is the biggest part of this story; that is, the book itself isn’t particularly action-packed, it doesn’t span dozens of years, it even takes place mostly within a relatively small space.  Instead, it’s the story of one part of one boy’s life, told from his perspective.  So if I lost track of that voice at any point in the book, the whole story would have been thrown off; I think that’s key for a lot of character-driven writing.

You don’t shy away from the grittier aspects of teen life, like sex, the f-bomb, parents who lie, suicide. Have you ever been asked to tone down?

I’ve never been asked to tone it down, but I’m sure there are plenty of people who won’t buy, recommend, or even read my books because of their content; and of course, I respect their choices.  For my part, I’m never trying to be edgy; I’m just trying to tell a story as honestly as possible.  I’m not sure I could tone it down if I was asked, because the truth is, I’m not making a conscious choice to write something that might need toning down – I’m just telling a story.

In THE LUCKY KIND, your protagonist Nick does some unforgivable things in the course of his journey. What is your rule of thumb to writing unlikable actions while keeping reader sympathy?

I’m not sure I think Nick’s actions are unforgiveable, necessarily.  I don’t really think there are many things that truly fall under “unforgiveable.”  Nick lashes out at the people closest to him because he’s troubled.  Keeping my readers’ sympathy then, hinges on whether I’ve done my job as a writer.  That is, if I’ve written Nick’s voice well and truly, then my readers will know why he does the things he does (even when he himself doesn’t understand it) – and so they’ll understand his choices, and sympathize with him.

Come back next week when Alyssa talks about today’s rapidly-changing YA market and gives her own advice to aspiring writers.  Don’t miss it!

THE LUCKY KIND is now available at all booksellers.

Click HERE to link to part two of our interview.

0
Previous article: The flip side of self-promotion
Next article: Comic: Mother’s Day