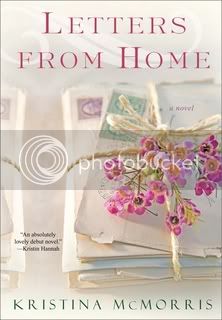 [1]Historical novelist Kristina McMorris came upon the idea for her breakout WWII-era novel LETTERS FROM HOME [2] much the same as most of the major events in her life: due to a combination of luck, skill, and serindipity.  Self-described as “not much of a reader let alone an aspiring author” McMorris stumbled upon her grandparents WWII correspondence while researching recipes for the cookbook.  But like all novelists, the moment became a “what if two characters did this?” and a story was born (read part one of our interview with Kristina HERE [3]).

LETTERS FROM HOME is a true late-into-the-night read.  The moment is 1944 as the war in the Pacific and in Europe reaches their climax, and follows the story of three Chicago-area women as they struggle to cope with the impact of war on the homefront, their personal lives, and their professional ones.  It’s gripping drama, and in McMorris’ capable hands the storytelling is sure, the research solid, the characters authentic.

To support the release of LETTERS FROM HOME, Kristina has launched a contest with a very cool prize.  Check out the details HERE [4] on her website.

Q.  You put a lot of care and attention into historical detail of the period: the homefront, the Pacific and the European theatre.  What are some of your research tips?  What do writers need to know to keep from the dreaded info dump?

KM: What helped me tremendously was plotting the chapters before writing them, which allowed me to narrow my research efforts. Otherwise, I could have been easily swallowed up by the amount of information out there, from fashion and transportation and music specifics to extensive battlefront details in two very different theatres of operation. Knowing the timeline and general locations of my scenes saved me a whole lot of unnecessary textbook reading.

A bit of advice I would offer, when it comes to research, is to seek out at least one “expert” in every major field incorporated into your story and ask them to read the manuscript to flag any possible errors. You’d be surprised how many people love to simply share their knowledge with others. As for info dumping…I don’t think there’s anything wrong with throwing loads of research into the first draft. Once you start the editing process, that’s when you really have to decide two things: Is this actually interesting, or just interesting to me? And, does this detract from the actual story?

Q.  Editing is a necessary evil.  Was there some juicy factoid or cool storyline that made it to the cutting room floor?  What is your editing rule-of-thumb?

KM: Aside from general tightening of prose, the majority of what I trimmed from the first draft was history dumps. The love story was ramping up to the climax, and I swear I hit a pause button in order to educate the reader about military strategies and turning points in particular battles—for three straight pages. I had become so fascinated by my historical research, I’d apparently embarked on a mission to teach readers what I’d learned.

With the help of critical feedback, I reminded myself that this wasn’t meant to be a textbook; any reader looking for that type of read, wouldn’t be picking up my women’s fiction novel at the store. Instead, I chose carefully what to include, and even then did my best to weave in the information. Above all, the story needs to come first.

Q.  You come into the publishing industry with a wealth of experience, which is unusual for most first-time novelists.  What do you think is the most useful in terms of marketing, and what isn’t?  If a writer only has time and money to do one thing, what would you recommend?

KM: I think the most important thing to keep in mind is that it’s a business. Novels are an art form, but the journey toward publication, at least for the publisher, is about the bottom line. Approaching your career that way will no doubt put you at an advantage. Based on my marketing background, I tried to imagine how an agent or editor would think, then pondered what I could do that would make it hard for them to say no. Also, what could I offer that would make their job easier?

In a workshop I often teach on the topic, I stress professionalism (query letters are a 3-second advertisement!), preparation (referrals, contest wins, endorsement quotes), and determination (giving up isn’t an option). Once you’ve sold the manuscript, the best thing you can do is market your book to your own publishing house through contagious enthusiasm and out-of-the-box yet effective promotional plans. By no means does an author need to spend a lot of money to do any of this.

Q.  LETTERS FROM HOME seems to be one of those “big books”: picked up by book clubs, Reader’s Digest and Doubleday, and is being shopped for film rights.  When you were writing the book, did it seem to you like this project could hit the marketing sweet spot?

KM: The story always played out cinematically in my head, so for that reason, I felt it did offer some nice commercial appeal. But in the end, you can never really predict what a subjective market is going to do—especially, like in my case, when you sell the manuscript nearly two years before publication. As far as book clubs go, I’m absolutely thrilled with the reception the novel has received so far. While writing the book, I’d realized at some point that there were enough topics for discussion to warrant interest from reading groups; therefore, I created a whole page on my website dedicated to creative ideas for book clubs. At the back of the novel, in addition to a discussion guide, I also included 1940s recipes that could enhance readers’ gatherings.

Q. What is some of the best advice you’ve gotten as a writer?  The worst?

KM: The best was…stay true to your voice. You can improve everything else, but you are the only person who sees life as you do. Don’t let other people’s opinions edit out what’s uniquely yours.

The worst? Just about everything involving the word “never”—from never breaking any so-called “literary rules” to telling me to forget about ever selling my book, since “WWII will never sell.”

The only “never” I subscribe to: If you know what your goal is, and you’re willing to go after it, never give up.

KM: I just completed my second novel for my publisher. It’s another WWII love story, but completely different from the first. It’s about a Caucasian violinist who secretly elopes with her Japanese-American boyfriend—against societal molds and families’ wishes—the night before Pearl Harbor is bombed.

I’ll leave it at that for now, as I don’t want to give too much away. But I will say that I’m extremely proud of this book, in which I was able to infuse a unique perspective of living between two cultures, since I myself am half-Japanese though was born and raised in America.

Other than living in the land of promotion for my debut, I’m continuing to strive for a healthy life balance as the mother of two young boys. And as the release date approaches, I’m also making a conscious effort to enjoy every moment. It’s been a long, bumpy road, and I don’t want to miss any part of the reward.

LETTERS FROM HOME is available everywhere.

Kathleen Bolton is co-founder of Writer Unboxed. She writes under a variety of pseudonyms, including Ani Bolton [6]. She has written two novels as Cassidy Calloway [7]: Confessions of a First Daughter, and Secrets of a First Daughter--both books in a YA series about the misadventures of the U.S. President's teen-aged daughter, published by HarperCollins, and Tamara Blake, for the novel Slumber [8].