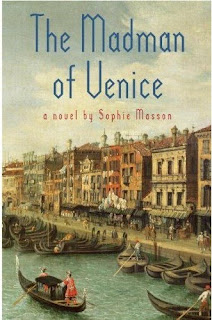 As promised in our squee post earlier this week, contributor Sophie Masson found time to squeeze in a Take 5 Q&A on her new release THE MADMAN OF VENICE as she traveled back from Paris to Australia.  Congratulations, Sophie!

Q:  What is the premise of your new book?

It is 1602 and 17 year old apprentice and would-be writer Ned Fletcher travels to Venice from London with his employer, merchant Matthew Ashby, Ashby’s widowed sister Mistress Quickly and Ashby’s lovely daughter Celia(with whom Ned is–apparently hopelessly!–in love. They go to investigate two mysteries: what is happening to the cargoes belonging to Ashby and his fellow London merchants, which have been targetted by pirates; and the disappearance of a young Jewish girl, Sarah Tedeschi, who has incurred the wrath of a powerful Venetian aristocrat, the Countess Montemoro. They find much more than they bargained for..Lots of danger, excitement, adventure, romance and a touch of comedy in a very Shakespearean-influenced mix!

Q:  What would you like people to know about in this story?

I’d really just like them to sit back and enjoy the ride!

Q:  What problems and challenges do your characters have to overcome in this story?

Quite a few! they have to solve mysteries, confront many dangers, and try to win love!

Q:  What unique challenges did this story present you, if any?

Lots of research to do! I have been to Venice so know the setting–but had to do a good deal of research on the situation at the time, life in the Ghetto, even logistical problems like how long it took to go to places! You also have to be careful not to let too many modern attitudes intrude in a book set at that time.

Q:  What has been the most rewarding aspect of this book?

I just so much enjoyed Ned’s character–he is brave if a bit foolhardy, frank, open and a bit naive, passionate but a bit clumsy–I very much enjoyed following him around! And I loved recreating the intriguing atmosphere of Venice at the time.

Thanks Sophie!  THE MADMAN OF VENICE is available now at all booksellers.