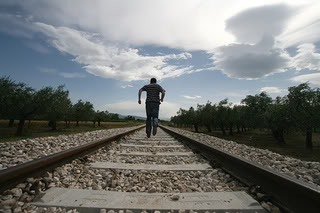 I meet many writers who ask (essentially), “Read my writing and tell me if I should keep trying.”

I have a response to that you can read here, but I also empathize if you’re looking for some sign you’re not completely hopeless. It’s tough to continue doing something when you receive no recognition or encouragement for it.

There are a few rare authors who know they’re damn good and their confidence carries them through the 10+ years it takes to be recognized. Plus their confidence and enthusiasm can be infectious in the presence of agents and editors.

But all writers carry significant paradox and conflict inside them (which I commented on, at length, here).

What I find is that most reassurances, while offering a boost to a writer’s ego, are ultimately external, fleeting, and momentary. A writer needs an essential fire inside, or an attitude, that carries them the distance.

(I think this may be why so many wonderful writers are long-distance runners. Go see this book by novelist Haruki Murakami.)

While at BEA this week, I had an opportunity for a relaxed chat with Jeanne Bowerman, a screenwriter and freelance writer, who is just beginning her journey. During our conversation, it struck me that Jeanne will ultimately make it. But I have seen very little of her writing.

So how could I know this?

It’s her attitude and approach, which is defined by:

I’m sure that Jeanne has experienced frustrations, and has also disagreed with the feedback or direction she has received along the way. But her approach is to take note of everything, really experience what the world is offering her, take away what is useful and suitable for her core mission, and discard/ignore the rest.

It’s a kind of wisdom that comes only with knowing yourself and what you want. As Bob says in Lost in Translation, “The more you know who you are, and what you want, the less you let things upset you.”

My hope is that every writer I meet will not ask, “Read this and tell me what to do,” but “This is my mission, how can I improve and grow?”

Jane Friedman has more than 20 years in the publishing industry, with expertise in digital media and the future of authorship. She's the co-founder and editor of The Hot Sheet, the essential industry newsletter for authors. You can find out more about her consulting services and online classes at her website, JaneFriedman.com.

+4
Previous article: Storytellers: You Are Obligated To Deliver The Goods
Next article: Good News, Other Tidbits, and What About YOU?